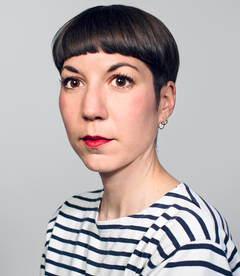 Mélissa Rouvinet graduated from the Haute Ecole de Travail Social de Genève, in Psychomotricity, and then obtained a Bachelor's degree in Visual Arts in 2019 at the Édhéa, School of Design and High School of Art of the Valais. The same year, she enters the Master in Theater orientation Scenography at La Manufacture. Her work has been shown at the Galerie 3000 in Bern, at the Bernhard Bischoff Gallery, at Fri Art Kunsthalle in Fribourg and at the art space Tunnel Tunnel in Lausanne. As part of her Master's degree, she designed the set for Par-dessus Bord by Michel Vinaver at the Théâtre populaire romand, directed by her colleagues Jeanne Kleinman and Juliet Darremont-Marsaud, as well as the set for Bains en famille, directed by Anouk Werro. She collaborates for the cinema as a set designer and also creates costumes for the theater and the cinema.