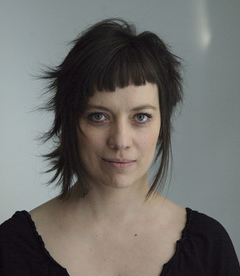 The respiratory techniques of yoga are at the source of Myriam Gourfink’s endeavors. The idea is to seek after the inner urge that leads to movement. Guided by breath, the organization of bases of support is extremely exact, while the consciousness of space is shaky. The dance becomes slow, tedious within continuous time. This knowledge of movement and space makes possible the conception of choreographies without studio rehearsal. Thanks to what it suggests of a dance situation, there is no need to move in order to feel dance : the senses and the intellect reconstitute it.

As do musicians, she uses a symbolic writing system to compose the geometrical universe and poetic evolution of dance. Having studied Labanotation with Jacqueline Challet Haas, she undertook a quest, using this system as a point of departure, for the formalizing of her own compositional language. Each choreography encourages the performer to be conscious of his acts and of whatever passes through him. The scores activate his participation : he makes choices, carries out operations, confronts the unexpected within the written text, to which he responds instantly.

For certain projects, the scores include computer programs for the scrambling and real-time re-generation of the pre-written composition : the program runs the score in its entirety and generates millions of possible compositional sequences. The performer, via captor systems, guide the process of modification of the choreographic score, which they read on LCD screens. The computer setup is thus at the core of the space-time relationship. As the piece proceeds, it makes possible the structuring of as yet untried contexts.

A leading figure in choreographic research in France, but also the guest of numerous international festivals (springdance in New York City, the Künsten Arts festival in Brussels, the Festival de la Bâtie in Geneva, the Danças Na Cidade festival in Lisbon etc.), Myriam Gourfink was artist in residence at the IRCAM in 2004-2005 and at the national Fresnoy-studio for contemporary arts in 2005-2006. From january 2008 to march 2013 Myriam Gourfink has been director of the Programm for Choreographic Research and Composition (PRCC) at the Royaumont Foundation. From 2012 to 2015 she is artist in residence at the Forum de Blanc-Mesnil.